What's the difference between gammon & ham?

"A lot of people don’t really know the difference between gammon and ham, or how it’s made. Well, to be honest, there isn’t a great deal of difference, really, as once gammon is cooked, it becomes ham."

Gammon is sold in supermarkets and by your local butcher raw, and requires cooking before you can eat it, whereas ham is ready to eat immediately, but both are made in a very similar way.

Both gammon and ham are cuts from the hind legs of a pig, and are either salted, brined, or smoked. Salting preserves food by drawing the moisture out, therefore allowing the meat to mature safely and to develop flavour. Brining works in a similar way, but actually works to keep meat as moist as possible for longer, rather than drying it out. Finally, there are a number of different smoking techniques, such as cold smoking to add flavour before cooking, and hot smoking which adds flavour and cooks simultaneously.

Gammon and ham are both absolutely delicious cuts of pork, which are incredibly versatile and can be enjoyed in a number of recipes – it’s no wonder we’ve been eating gammon and ham for thousands of years! Gammon in Cider and Waldorf Salad Jerk Gammon with Corn and Coleslaw Gammon Florentine with Garlic and Spinach Lemonade Gammon with a Pimms Glaze Potato Bake with Gammon and Apple Roast Gammon with Mulled Wine and Cranberry and Cinnamon Glaze 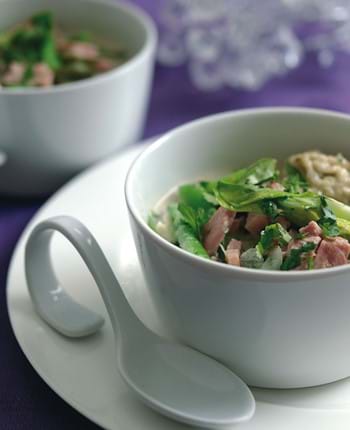 Roast Gammon in Cider with Calvados and Apples