Sausages are undoubtedly one of the British nation’s favourite dishes, and as such, we have quite a few unique varieties around the country. We’ve searched all over to create an illustrated guide to the most popular British sausages. The Cumberland sausage is a British classic, dating back around 500 years. It’s typically made with a meat content ranging between 85%-98% pork, making it particularly succulent, and is season with black pepper and other herbs and spices. The Cumberland is most famous for its distinctive long coiled shape, up to about 50cm in length. As of 2011, the ‘Traditional Cumberland sausage’ has been granted Protected Geographical Indication (PGI). One of the best-loved British sausages, the Lincolnshire is made distinctive by its inclusion of sage as a main ingredient. Originating in the 19th century, this popular sausage is widely available all over the country. It hasn’t yet been granted protected status, however it does have its own festival held annually in its honour in the city of Lincoln.

The Oxford sausage is a distinctive blend of pork and veal meat, which is quite highly seasoned with various different spices, lemon and herbs. Originating, unsurprisingly, in the city of Oxford in the early 18th century, the Oxford sausage was later popularised by Mrs Beeton’s Book of Household Management in 1861. 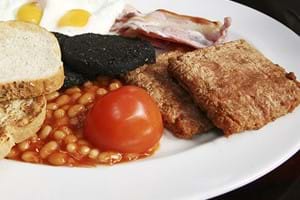 The Lorne sausage is particularly unusual in that its shape is square, rather than the traditional rounded sausage shape, hence it also being known as a square sausage, or flat sausage. A mixture of ground pork and beef, rusks and seasoning, this delicious sausage hails from Scotland, and is traditionally served as part of a classic cooked breakfast.

As far as sausages go, puddings are some of the more unusual delicacies out there, and perhaps not to everyone’s taste, but trust us, they’re delicious. Originally concocted as a means of using every bit of the animal, wasting nothing, there are a number of different types of pudding sausages. One of the oldest, and most popular, types of puddings is black pudding, made with a mixture of pork blood and fat, oatmeal, and seasonings. Around the Middle Ages, white pudding emerged, to join its cousin black pudding, with the key difference being that it doesn’t include any blood, just pork meat, fat, suet and oatmeal. Similar to white pudding, there is also hog’s pudding, which shares many of the same ingredients, but is spicier in flavour, and smoother in texture. One of the most popular sausages in Britain is the chipolata, which is made distinct by its long, thin shape. Chipolatas are made using a smaller diameter skin and are particularly popular around Christmas time, wrapped in streaky bacon to make everyone’s favourite, pigs in blankets.