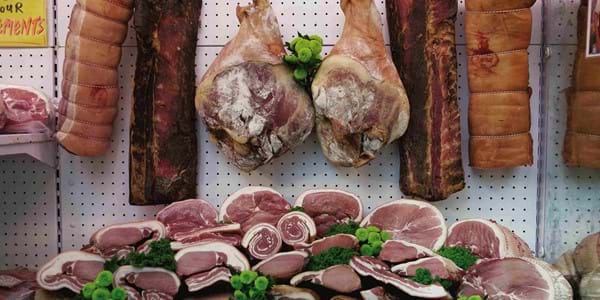 "When it comes to bacon, there’s more than meets the eye in terms of just how it’s made."

First of all, there are three main cuts used to produce rashers of bacon. These include streaky bacon, which comes from the belly, and is streaked with fat (hence the name), which adds depth to its flavour, and how it crisps up amazingly to give a wonderful texture. Next, there’s middle bacon, which comes from the side of the pig, and is a combination of streaky and back bacon. And finally, you have the most popular type of rasher of bacon in the UK, which is back bacon from the loin. This cut is leaner than the other two, with a thick, meaty texture, quite similar to ham.

Before any of these delicious cuts make it to your plate, however, they have to go through one of a variety of curing or smoking processes. When it comes to curing, this fits into one of two categories – either dry curing or wet curing – and within these categories, there are several different techniques you can choose from, based on your personal preference.

Cuts are rubbed with a sea salt mix for several days then cured for up to 20 to allow maturing. This removes water so the bacon shrinks less during cooking and prevents ‘white bits’ in the pan. This subtle flavour is great for families with kids and is ideal with an English breakfast or scrumptious bacon butty.

Maple syrup is added to either dry or wet cures with up to 5 days of curing. This leaves a unique, caramelised flavour, which is often intensified through smoking. This is an indulgent treat, best as the centrepiece of a meal, perfect for a five star bacon sandwich.

Smoking is usually carried out after curing, rather than being a cure in itself. Quality bacon is smoked over wood chippings which adds another level of suitable flavour. Oak smoked is the most popular variety, though chippings come in many other types like Beech, Cherry or Applewood.

Sugars like Mascavado, Demerara or Molasses are added to either dry or wet cures, creating moreish bacon with a smoky aroma. It’s popular for enhancing bland foods like pasta and is scrumptious in salad. The distinctive taste is a winner!

With this original wet cure, the pork, bone, rind and all, is immersed in special brine for up to two days before another two weeks of maturing. The distinctive meaty texture works well as part of a recipe; the slight saltiness complimenting other ingredients, without overpowering them.

The process of making bacon can go in many different directions, and that’s just covering the traditional bacon rashers, varying in texture and flavour. Have a look at our bacon recipes collection to get ideas for your next bacon dish.